Five San Diego Bands That Inspired Me to Play 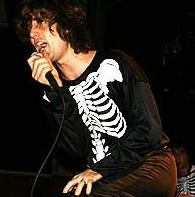 Luke Jenner grew up in the San Diego area and formed the Rapture shortly after moving to San Francisco. Their first album came out on San Diego based Gravity Records. The band mixes influences from many genres including post-punk, acid house, disco, electronica and rock, pioneering the post-punk revival genre. They were forerunners of the post-punk revival of the early 2000s, as they mixed their early post-punk sound with electronic and dance elements. They are currently based in New York.

Dave Hepler and Stimy were really nice to me. I looked up to Stimy and he taught me how to change a guitar string by winding it on top and under itself so it would lock. I thought he had the cutest girlfriend, I think she studied furniture design or something at some university. Dave Hepler gave me a copy of Dot Class C about ten years before it officially came out on a cassette tape. I took it on a trip to Colorado with my friend and listened to it about eight million times. On that same tape I had some extra room, so I put the first seven inch by Hundred Watt Halo on it. That was pretty cool. Later when I moved to San Francisco I slept on Brock Galland’s couch, that guy totally saved my neck.

Rocket From The Crypt “Lamps For Sale”
(Note from It’s Gonna Blow!!! HQ: I couldn’t find this bonus track from the Circa Now! reissue online so I substituted “Over the Rail”, another bonus track, because it’s awesome. Hopefully Luke doesn’t mind.)

I remember seeing Rocket play at a boys’ club somewhere in Hillcrest with Deadbolt. Speedo came out and slammed his boots on the auditorium stage floor right in front of my face and the drummer drummed so hard his glasses fell off. This band seemed like a gang that would kick your ass. I was pretty afraid to fight people in High School. I wrote Speedo a letter once and he sent me some rocket stickers and a letter about not being able to play enough pinball because he had been on tour too much. When I bought my first guitar from Guitar Center, a gun metal blue Stratocaster, I proudly put one of those stickers on right under the instrument jack. I moved away from San Diego when I realized that there was no getting past John Reis on the pyramid. When I moved to San Francisco I finally had the courage to wear western wear shirts and use pomade and grow sideburns on purpose. That would have been to scary in San Dog. I remember my pillow was pretty gross for a while after falling asleep drunk and waking up with pomade stains on it and the sound of a record player spinning around the middle hole in the morning.

Watching them perform at Cafe Chabalaba was literally a life changing event for me. It was me and three other people. One of the dudes broke his guitar strap, which I guess was some kind of regular occurrence I found out later. Any way I had never seen anyone ask for a new strap on the mic before and actually get one. My band at the time used to cover “Death To Dead Things.” I used to work at a record store called Record Heaven on El Cajon Blvd. I think they wrote a song about a donut shop over there and I thought that was cool. This is another band that San Diego seemed to take for granted. I was totally impressed that they were liked by John Peel and actually made it out of San Diego.

I loved that Fluf did great covers and would always play all ages shows. Something that wasn’t lost on me. I really liked 7″s at the time and would go to Off The Record Hillcrest and excited wait to see what would come out. It seemed like a secret little universe, like collecting comics with other dorks or something. I loved that. I also remember that O wrote his own review for the 10″ in Genetic Disorder. When I figured that out, I was pretty impressed. I also appreciated all the secret messages on everything they put out and the multiple covers, yata, yata. O is a song writing genius and gets no respect in San Diego for some reason. Maybe because he is at every show and people take him for granted or something. I remember seeing a bootleg video of Sonic Youth playing in San Diego in the 80’s and someone breaks a guitar string and bam, there is O changing a guitar string on stage left by holding up the body of the guitar to his ear so he could hear it over all the feedback. That guy is incredible.

There are no recordings of the four piece Butch Wax with Jackie Star that I know of, but I really loved that band. I was in a band called Carpet, named because I had gone to see Sonic Youth, Mudhoney and Pavement at the Del Mar Fair Grounds. I was in love with the drummer who would throw his sticks in the air mid song and totally car crash the rhythm and not really care, which I was totally amazed by. I remember going to the Tower Records in El Cajon out by where I lived in La Mesa to listen to Slanted and Enchanted on the play center kiosk the day after the show with my friend Mike Henning. I thought that the record was made by dudes who totally couldn’t play music, but I couldn’t stop listening to it. I would sing Zurich Is Stained and Trigger Cut while I was in the pool on the varsity water polo team at Helix. I remember Butch Wax would cover songs off that record, so they were like my own personal Pavement kinda sideways pop thing from San Dog. It felt like some kind of secret that we were both in on. Getting right up and talking to all these people who played music was so awesome.